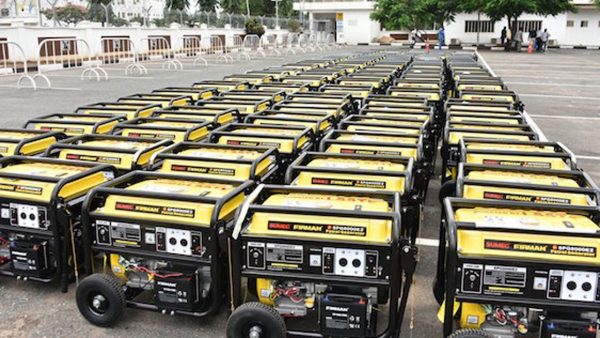 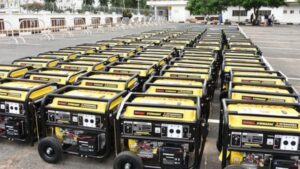 THOUGH emissions from electric generators contribute major health and environmental hazards in Nigeria, the country spends huge foreign exchange importing the alternative power sources. According to data from the United Nations International Trade Statistics Database, UN Comtrade, Nigeria has spent not less than 2.4 billion dollars on importation of generating sets in the last 24 years.

UN Comtrade, the largest depository of international trade statistics, captures Nigeria’s generator imports between 1996 and 2019.
In 2013, the country imported 262.5 million dollars worth of generators, the highest in two decades.
The importation of generators has been on the rise since 1996 and reached the zenith in 2013.

This is not surprising as the average cumulative power supply received per day by Nigerian households between 2013 and 2015 was below 6 hours per day, according to a survey by NOI Polls.

In fact, the average operational capacity of power infrastructure in the country is estimated at 3,879 (MW).

The poor power supply in the country has, therefore, forced Nigerians to seek alternative power sources. Between 2015 and 2019, Nigerians have spent nearly 500 million dollars on importation of generators. 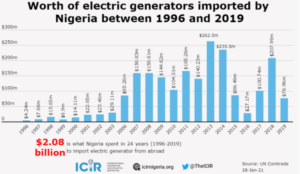 It is worth noting, however, that only 37 percent of the amount expended on generators in 2018 was spent in the subsequent year. This necessarily does not mean that there was an improvement in the power supply.

President of the Nigerian Association of Energy Economics, Prof. Yinka Omorogbe, once described the energy sector in Nigeria as ‘a dismal failure.’

A direct effect of the poor power supply is attributed to the 77.5 percent Nigerians who have resorted to purchasing and using alternative sources of power such as generators and others, according to NOI Polls.

Nigeria is among the top six countries generating energy by back-up generators. Others are India, Iraq, Pakistan, Venezuela, and Bangladesh.