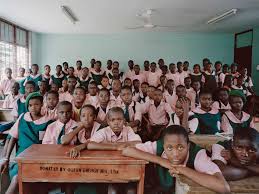 Nigeria: ‘Your Children Will Learn Less, Earn Less in the Future’, World Bank Tell Nigeria, Others

The world bank President, Jim Young Kim, in the ongoing meetings of IMF and the World Bank in Washington D.C, has said many African Countries are not prepared to compete in what is increasingly becoming a digitalized economy, noting that many of the low skill jobs will be taken over by technology.

“There is tremendous hope that technology could help some African countries leapfrog and find new ways of driving economic growth.” he had said

He also stated that there is need to invest much more especially in the area of health and education.

“When we say rates of childhood stunting over 30 percent, meaning these children their brains are simply not as well-developed as their non-stunted peers, and that they will learn less and they will earn less in the future. We have good data on that.” he further stressed.

Kim stipulates that everyone understands the need for physical capital, for physical infrastructure and investments in infrastructure, but, there’s still an underappreciation of the importance of improving health and educational systems.

“Our sense is that as economies become more digitized that relationship between health outcomes and educational outcomes is only going to get stronger over time.”

…” time for all countries to really take a hard look at how well they’ve invested in their own people because that is likely going to be the most important determinant of whether they’ll be able to keep up with economic growth.” he added

See Also:  JUST STARTING A BUSINESS? THESE 4 TIPS WILL HELP YOU STAY CONFIDENT AS A FIRST-TIME ENTREPRENEUR.

According to the report released at the meeting titled ” The Changing Wealth of Nations,” human capital represents 65 percent of all the wealth in the world.

He called on African countries to remove fossil fuel subsidies that are often very regressive, and only help the rich more than they help the poor.

He said ” Every African country has to look much more seriously at how it improves its own domestic resource mobilization. So in other words, they should be better at collecting taxes, you know, to just provide the basic services we think countries should collect at least 15 percent of GDP in taxes. Many countries don’t reach that level.”

Kim also pointed out that Tobacco taxes have shown to be very effective at raising revenue and decreasing smoking and can be used to finance all kinds of things.

“So there are so many things that can be done to help countries both invest in physical infrastructure and also invest in human capital, but it requires reform and it requires courage. And so I know these kinds of things that I’m talking about are difficult, but please let all the African leaders know that the World Bank Group’s ready to help them undertake all those measures.” He added.